More
Story completed in 2012 thanks to Jessie & Carmelo's grandchildren

Leonor's children, Melo and Michael, confirmed that Jessie and Carmelo had a boarding house in Singapore before the war, as advertised  below in The Straits Times.

The beautiful house at 10 Gilstead Road still existed in 2009:

I wonder if Jessie & Carmelo gave it the name "Beulah"?  It is a Hebrew word meaning married, and also the name of a mystical place, somewhere between earth and heaven, referred to in The Pilgrim's Progress by John Bunyan, and in the works of William Blake ... and today there are 2 towns called Beulah in Australia: in Tasmania and in Victoria ...

During the 1930s, their daughters Leonor and Jessica Georgina, together with her husband Walter "Mick" St Leon, continued on with various acts and toured Japan, China and other Asian countries until they retired from circus life.

When the Japanese invaded Singapore, as a British subject Jessie was interned, as were Jessica Georgina, her husband Mick St. Leon and their child Phillip, along with Joseph Fabian "Mickey" Donnelly, Leonor's future husband..

Carmelo and Leonor Palomar were Spanish and the Japanese were not going to intern them because Japan was not at war with Spain. However, having been warned by a Japanese friend that it would be safer in gaol, they persisted that they were with Jessie and were eventually incarcerated in Changi.

The women in the camp made quilts, some of which contained messages, and one of the squares in the one below was worked by Leonor: In her book "Diary of a Girl in Changi", Sheila Allan recalls a circus performance in the camp in November 1942 involving the Palomar family!

Jessie also ‘adopted’ friend Eddie Osiak, an American of German extraction, as her son, so that he would be safer inside Changi gaol than outside. He was with Mick and Mickey in the male section.

After the war, Jessie worked for the British Army, and with Fitzpatricks and Cold Storage companies in Singapore. She resided in Raffles Hotel while working for the Army, but by 4th February, 1950, had moved on and had some puppies for sale: 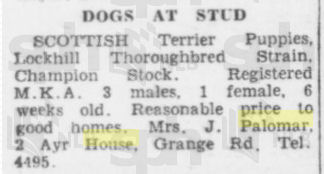 Jessica Georgina and her husband Mick St. Leon left Malaya in the mid-fifties and moved to Melbourne, Australia, where Jessie went to live with them (Carmelo had passed away in 1951).

In 1958, Leonor and her husband Mickey Donnelly moved from Malaya to Tasmania, Australia, where Mickey's family lived.

Research had led me to believe that might be the case, based on the following 1931 article that conjures up some lovely images of that period in Tasmania: Jessie eventually moved to Tasmania to be with Leonor and her children Melo and Michael.  To quote Michael, she was "greatly loved by us all and was a very knowledgeable and caring lady. She was Melo’s and my homework mentor and instilled in us a love of knowledge and books.  Her love of animals continued throughout her time with us caring for budgerigars (which she taught to talk) and several dogs".

She was nursed in her later years by her daughter, Leonor, and died on 27th October 1985, in her 94th year, in Hobart, Tasmania.

Jessica Georgina and Mick St Leon are no longer alive, but their son Philip Carmelo was living in Melbourne at time of writing.

Leonor's husband Mickey is no longer alive, but her son Michael lives in Tasmania, not too far from Leonor who turned 92 this year and was surprised to learn that I should be so interested in her story!

Her daughter Melo lives in England, and Melo's oldest daughter is called ... Jessica!  Having known nothing about each other's existence before, Melo and I actually met in June 2012: My warmest thanks to Melo and Michael for having helped me fit together of all the intriguing bits revealed by my research, and write the final chapter of Jessie's wonderful story.  It has also prompted me to publish Jessie's letter to her actor cousin, Ernest Bale, written in 1946 (see page "Ernest Bale").